Cool Roofs in Use in Northern Climates

ROOFING CHALLENGE: The University of Iowa’s Carver-Hawkeye Arena hosts some of the most intense athletic competition in the country, seating 15,500 college basketball fans and serving as a venue for concerts, sports camps and commencements. But when a hailstorm and a tornado came to town on the same day, the arena itself was confronted by a powerful competitor that damaged the 25-year-old roof. The storm damage called for an immediate roof replacement within two months to avoid delaying the start of the school’s fall basketball season.

Pleased with the success and results of the old roof preceding the severe weather, University of Iowa’s roof consultants recommended Sika Sarnafil’s vinyl EnergySmart Roof® to replace the older Sarnafil membrane. Because vinyl can be recycled at the end of its useful life, Sika Sarnafil was able to transform the old vinyl roofing membrane into new roofing walkway membrane. The solution was not only environmentally friendly, but proved to be a more cost-effective choice than paying for dumpsters and the associated tipping fees at a landfill.

Even with the use of recycled membrane, there were few constraints when designing the new roof, which was created to be aesthetically appealing to the 15,000 college basketball fans who would fill the stands in just two months. Copper brown flashing membrane on the truss column bases complemented the roof’s distinctive exposed Cor-Ten steel trusses for an especially aesthetic profile. The result was a distinctive geometric design.

Despite the narrow timeframe, added recycling component and complex design, the project was finished in one phase and ahead of schedule, in time for the start of the Hawkeye basketball season.

PVC: The Go-To Material for a Durable, Sustainable and Long-Lasting Roof

Hear a veteran roofing consultant talk about his reasons for choosing PVC for the roof of the University of Iowa’s Carver-Hawkeye Arena, including its durability, recyclability and watertight abilities in even the most challenging conditions. 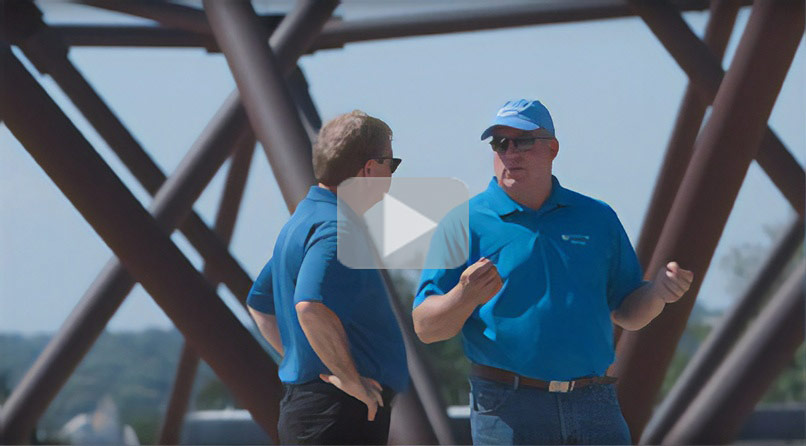